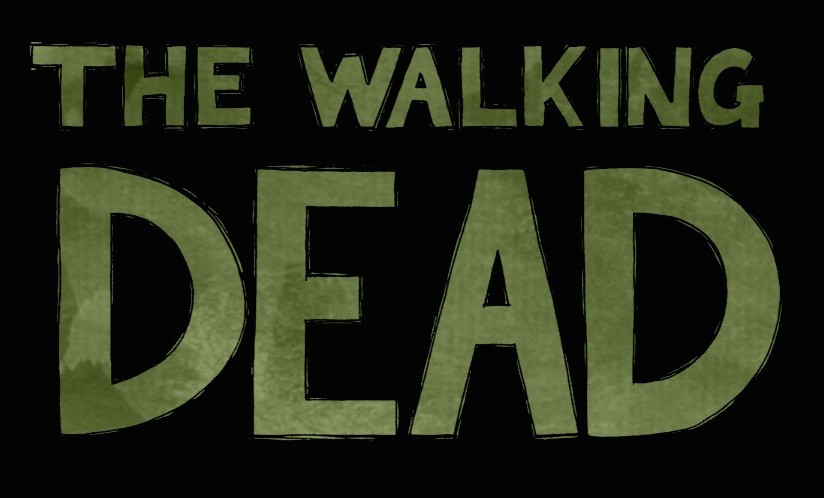 Telltale Games is known for their choose-your-own-adventure, point-and-click style games.

Telltale brings storytelling to the forefront, abandoning common video game clichés for authentic narrative. Games like these risk a lot. The Walking Dead doesn’t look like what’s popular. It doesn’t play like what’s popular. Yet Telltale’s all-star storytellers manage to get gamers emotionally invested, and can even bring grown adults to tears.

If you’ve ever seen AMC’s hit TV show of the same name, you know the premise. Even if you’ve been living under a rock the past few years, you could probably guess the theme by the title: a good ol’ fashioned zombie apocalypse.

Telltale’s spin on The Walking Dead series features a fresh new cast, starring Lee, your playable main man with a shady past. Shortly after the start of the zombie apocalypse, he comes across darling Clementine, a little girl whose parents are missing. Lee quickly takes on the responsibility of watching over Clementine, who becomes a surrogate daughter. 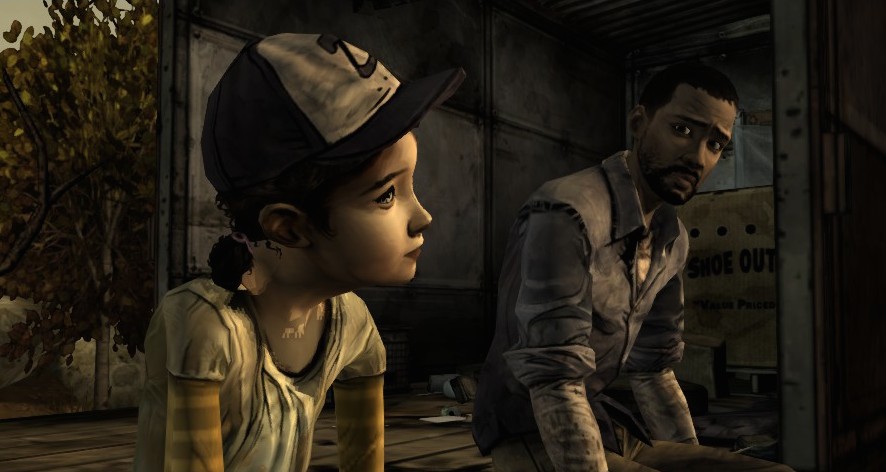 You two eventually form a group with the other lost and wary living. While your main objective is to stay safe and stay alive, the primary focus of the game revolves around your interactions and relationships with other members of your party. Who will you back when times get rough? What difficult calls will you make? The Walking Dead forces you to make many tough decisions, and traversing those choices (and their repercussions) is the beating heart of the game.

“What is that? Is that a movie?” my roommate asked, while I played The Walking Dead beside her on the couch. Others who live with non-gamers might have heard similar queries, as The Walking Dead often plays out more like a movie than a video game. “Are you even doing anything?” she continued to ask, “it looks kind of boring.” Ah but no, far from it!

The gameplay meat of The Walking Dead is composed largely dialogue options – you choose from several dialogue choices to dictate what you say to the characters around you, and they’ll respond differently depending on what you say (and they’ll remember what you did or did not say to them when shit hits the fan in the future).

That’s it. Sure, you’ll run around for a bit and click the all-too-obvious hints. Sometimes there are puzzles, but it’d be a stretch to call them challenging. The truth is that you don’t do a whole lot in The Walking Dead, but it never feels that way since your decisions and choices always seem heavy and loaded with intent.

A Morality Game That Operates in Shades of Grey

Morality games aren’t usually done too well. Games that operate with a morality component often force you into a devil or angel suit (looking at you Infamous).

The Walking Dead lets you walk the line however you’d like, and most of us will find ourselves wearing a grey hat of some shade. The decisions are tough too – certainly not of the “torch the prison bus full of rapists or save the disabled school children” variety. The game made me pause several times to consider what my dogma would be in the wake of a worldwide apocalypse. 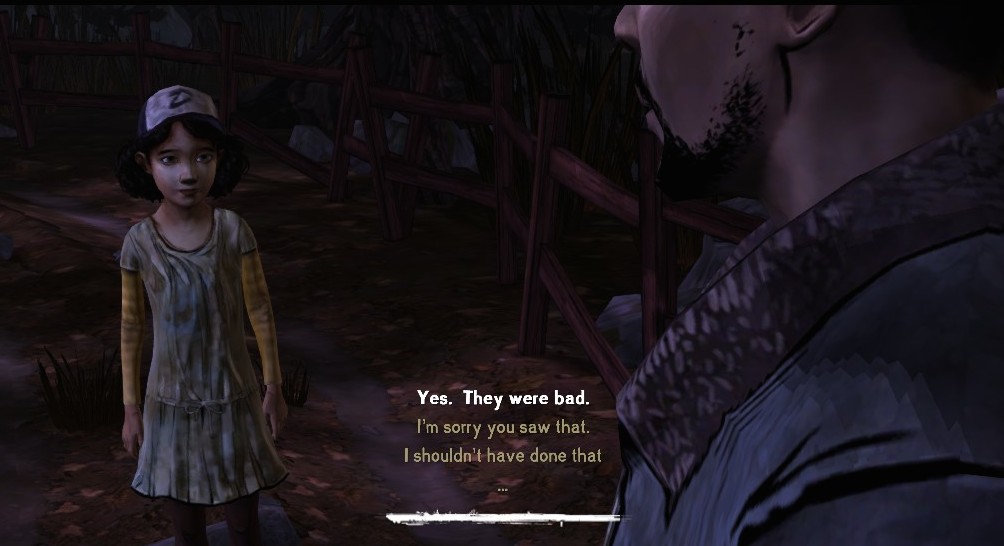 I myself tried to play to the tune of “in a world of monsters, us humans have to look out for each other.” Yet things were rarely (if ever) painted in black and white. Every choice seemed reasonable, every doubt valid.

Rarely do video games ever make you question your actions and life outside of the pixelated world, but The Walking Dead was one of the few games I’ve played where I often found myself philosophizing about my true thoughts on humanity, life, and other big picture items I don’t commonly traverse.

Some have criticized Telltale of falsifying the weight of your choices. And I can understand – characters may get swapped here or there depending on your attitude, but the main story arc never changes.

There were several instances I encountered where I would choose to have Lee say one thing, but he’d go ahead and do the opposite. For example, I might have Lee say, “there’s no way I’m jumping that gap,” but he would go ahead and jump it anyway since it was baked into the plot. Not a huge deal, but small inconsistencies like that make you aware that the choice element is, to some degree, an illusion. 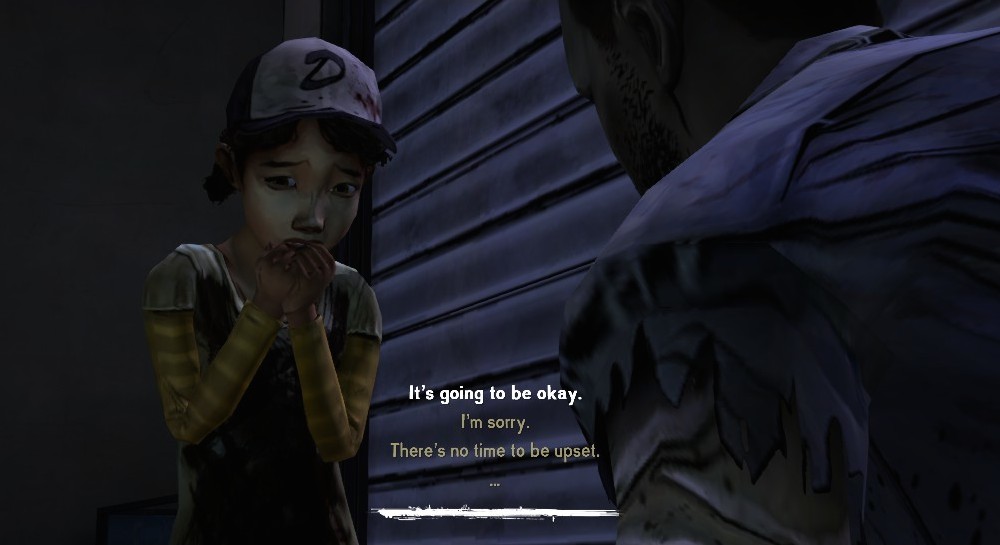 I’m not sure that really matters though – the illusion of choice makes The Walking Dead powerful enough to draw you in. The decisions feel like your own, and when you see changes (even small ones) play out based on your decisions, it feels moving.

I did also have some minor quarrels with the reveal towards the end of the game. It felt quite lackluster to me, enough to cause pause. While the writing was largely excellent, this reveal, along with a few other nonsensical situations, were damaging enough to remove me from the gameplay’s immersive experience (more on that later.)

Describing The Walking Dead to people isn’t easy. “You just choose what to say to people, and different things happen depending on what you say.” Doesn’t exactly sound spellbinding. No mythical dragons and spells, no gun wielding action, no vast expanses of land to explore. Telltale takes a risk with this game structure, but with incredible story lines and an expertly-crafted narrative, it’s no wonder these games earn critical acclaim.

The Walking Dead Season One earns a 4/4.

Below I’ll be discussing in-depth some of my thoughts on characters and situations within The Walking Dead Season One video game. I’d hate to spoil the experience for anyone, so be forewarned – don’t read below unless you’ve already played. It won’t make sense if you haven’t played the game already anyway.

The game managed to hurt my feelings quite a bit, especially in the final chapter. I was horrifically offended with Kenny wouldn’t help me look for Clementine because “I wasn’t there for him when he needed me.” I actually didn’t mind Kenny – I helped him plenty, and was kind to Kadja. And Duck… well, I didn’t hate the kid. Not completely anyway. We drifted apart a lot after the Larry incident, sure. Those were tough times.

After Kenny lost his family, I felt much closer to him. We only had each other then (besides Ben….of course), and I considered myself the only “family” he had left. I shot his child so he wouldn’t have to. I always asked how he felt, always tried to be supportive. I gently talked him into putting down the child walker in the attic of the mansion, hoping it would help him heal. Then he has the gall to claim that I didn’t have his back? I felt wronged and furious.

Still, with all the ups and downs we had been through, I planned on sticking with Kenny to the end. His boat idea was smart – even out in the country, zombies will trickle in, especially as more folks die; but if we got out to an island somewhere, we could survive. I was ready to stand by him, despite our disagreements. When you’ve seen so many people die and leave your group, you can’t help but treasure the few who have been with you since the very start, even if they can be assholes at times.

Then he died so unceremoniously. Or perhaps he didn’t – I feel The Walking Dead is the kind of game where it “didn’t happen if you don’t have pics.”

As for Ben – yeah, I gave him a hard time a lot because he annoyed the heck out of me and I was angry he was alive rather than Carly, but I refused to vote him out of the group (admittedly I abstained – I feel like being under zombie attack is never the time to make these decisions). I told Ben he needed to prove himself to me, and he failed to do so time and time again, so I’m not his biggest fan. I don’t trust him, I don’t rely on him, but I’m also not going to murder the guy.

When I saved his life at the bell tower, I was pretty sure he owed me one and would keep that in mind considering I had saved him barely 30 minutes ago. But no, even Ben failed me in my search for Clem, at least at first.

When I told Ben to decide for himself what to do, he wanted to stay. If I pressured him to join me on Clementine’s behalf, he agreed, and the game notes that I “gave Ben a chance to prove himself.” I wanted Ben to prove himself by choosing to come with me of his own accord, but since the game felt differently, I was forced to cheat a bit and change my choices to cajole him into accompanying me.

I was pretty hurt that the people who were most eager to join me on my mission to save Clem were the people I had known the least amount of time. What does that say about me, eh?

My whole motto this whole time is that the living have to stick together. I wasn’t throwing any of my group to the wolves. I’ll admit, I killed the first St. John brother when he was egging me on. After seeing the slaughterhouse and thinking of all those people he murdered…I lost it a little. It wasn’t the best example for Clem, but I couldn’t help it.

Largely though, I try hard to not kill any humans. Even Lily, who I absolutely was FURIOUS with after she killed Carly – I wanted to take her into the RV and then decide later what to do with her (I would have given her a gun, a few supplies and sent her on her way). I still wasn’t going to sentence her to death, although she arguable deserved it.

When the world is turning to shit and the zombies are taking over, the living can’t kill the living – every life is precious. And that includes moronic Ben, who feels like the frigging gungan of The Walking Dead.

As I mentioned earlier, I felt the “reveal” to be a bit lackluster. The whole situation with walkie-talkie man was weird and even a little confusing at first. 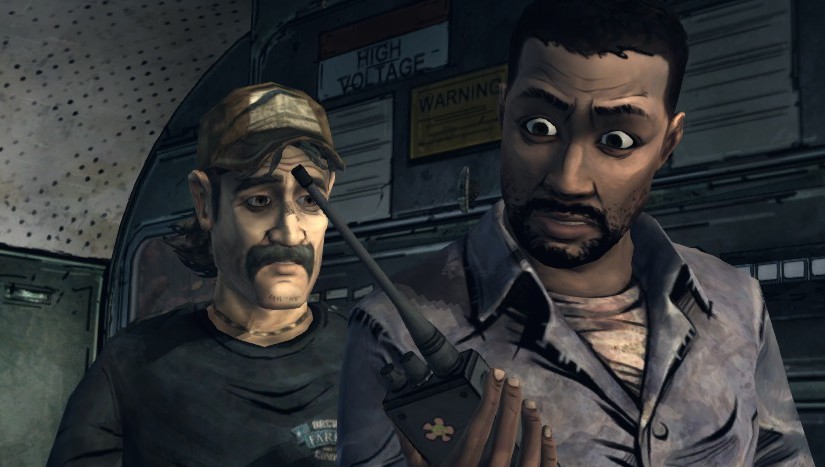 To top it off, I also had chosen not to steal supplies from the car, so his excuse that I “had done other bad things” seemed pretty pathetic. Yeah, I killed a murderous psychopath (and possible rapist?) back on the St. John farm. Is that really so despicable? His argument seemed very thin and I just wasn’t feeling it. 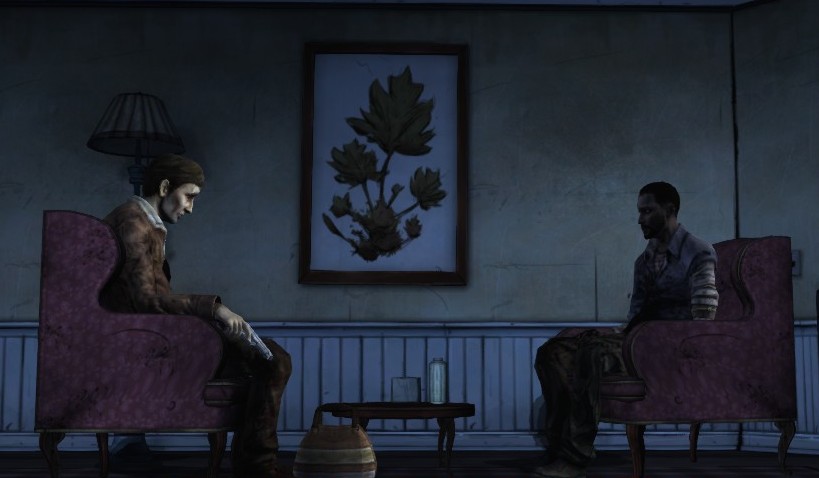 But the end with Clem. Wow, that was tough. I think the hardest part of that situation was telling Clem I was bitten. When she started to cry and begged me to say it wasn’t true… it broke my heart a little! 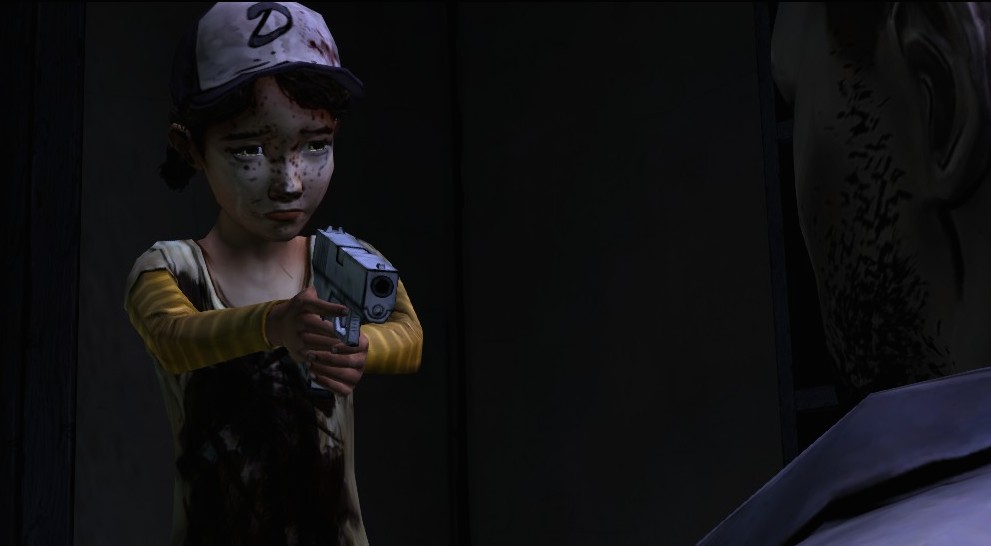 What’s next for Clem? The Walking Dead Season Two by Telltale is out, and I’ll soon be finding out for myself! Stay tuned. 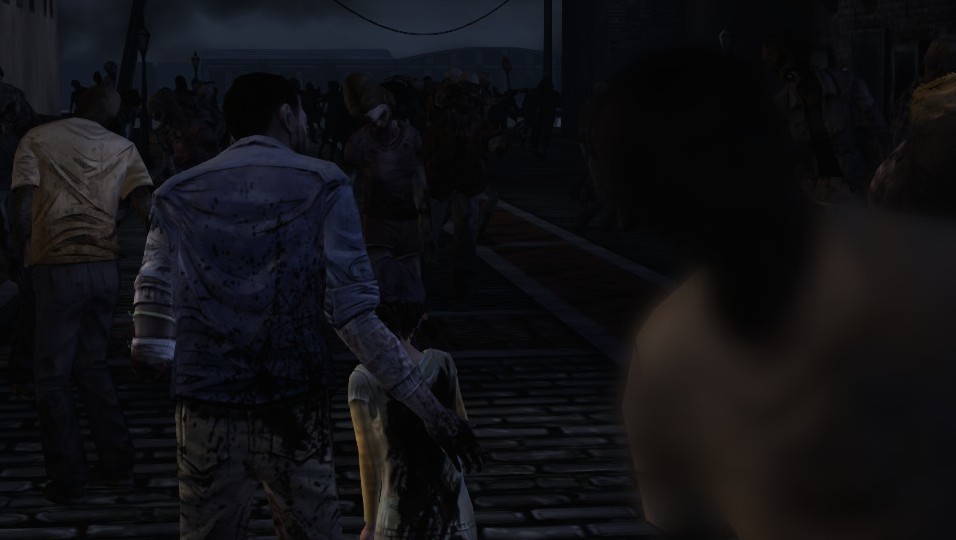