It’s a great way to stay in shape and feel good about yourself. But if you’re like me, it’s also boring, painful, and just generally not very fun. Or it used to be…. until the Zombies, Run app came along!

Zombies, Run is a hybrid audiobook/workout app. It does what you’d expect from other running apps like Map My Run or RunKeeper – it: 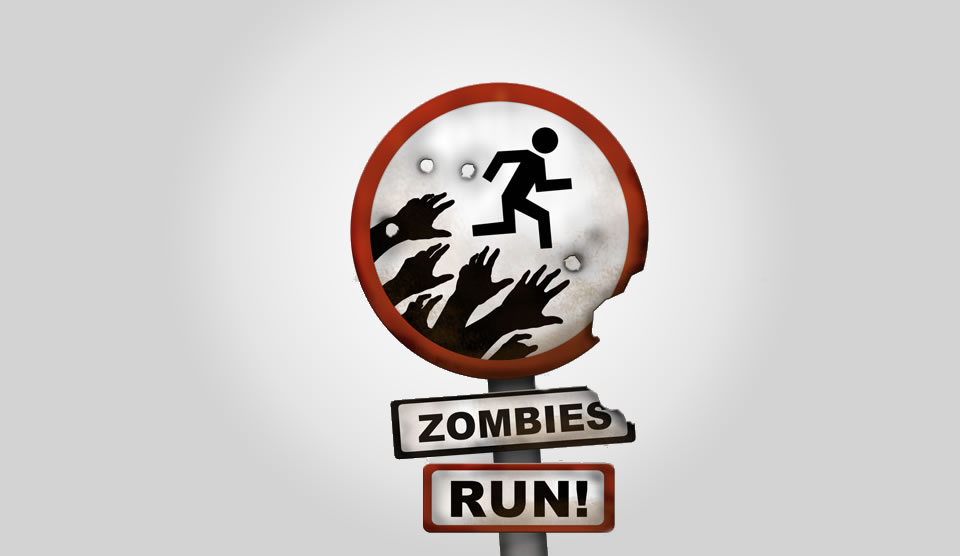 On your first run you’ll become immersed in a post-apocalyptic world where zombies have overrun the earth while humans huddle together in camps to survive. You become Runner 5, responsible for retrieving supplies and running special missions for Abel Township, a human base camp.

The audio story is presented as a series of radio transmissions. Base camp leaders instruct you on your mission operatives and guide you through infected undead zones to complete your goal. The dialogue is interspersed with music from your pre-selected playlist, creating a perfection combination of story and sweet jams.

Zombies, Run currently has 3 seasons, divided into approx. 25 – 30 individual missions per season. In Settings you can select to have your mission sessions last 30 minutes or 1 hour, although the missions almost always end short of that (I’ve had missions end at 23 minutes, and 52 minutes). Changing the mission time from 30 minutes to 1 hour simply means you’ll be hearing two or more song between story dialogue, as opposed to one song between dialogue for the 30 minute option.

The Chases. One of the most exciting features of Zombies, Run are the zombie chases. During each mission, you’ll have several instances in which you will be told that zombies are chasing you. An automated voice will interject and tell you how far the zombies are from you. You’ll need to run 20% faster than your average pace from the last 30 seconds in order to outrun the zombies. And outrunning those undead corpses feels awesome every time. The only thing better would be smashing their heads in with a frying pan, but alas, not possible.

The Zombie Chases feature can be turned off – I’ll sometimes switch it off when running on city streets where I know I’ll need to stop at crosswalks, etc. but let me stress – this is one of the coolest features of the app, so don’t shut it off unless you really have to. Plus, it’s great for interval training.

At $4 a pop, the Zombies, Run app costs a lot less than a gym membership!

You’ll get season 1 automatically when you purchase the app, while the other seasons need to be purchased through a “season pass.”

The Season 2  Pass and Season 3 Pass are $8 a pop. You can see why they charge what they do, as they have voice talent that needs to be paid, etc. Still, catch them on sale if you can.

Build Your Base. Throughout your run, you’ll pick up items that can be used to build up your base at Abel Township (which you can see within your mobile app or on the app’s companion site, ZombieLink).

I found the base building to be very motivating – I wanted to get out there and run so I could gather supplies and add a hospital to Abel Township. People need me for goodness sake!

ZombieLink. Besides getting a good look at your base, ZombieLink is also an awesome tool for seeing your running routes and tracking your pacing.

One feature I love more than a zombie loves brains – you can see how fast you ran during certain songs, and how much faster you ran when being chased by zombies.

Radio Mode. Sometimes you’ll finish a mission but aren’t done running. This is where the Zombies, Run Radio Mode comes in. It’s not story driven, but still keeps you immersed in the Abel Township universe as radio hosts Jack and Eugene chat with you and broadcast survival tips to any stragglers.

Special Missions. You’ll also find extra special missions (some free, some available for purchase). They include…

Zombies, Run has released some pretty awesome updates in recent months. However, some of these awesome updates are for iPhone users only….for now at least. Trust me, I’m bummed as an Android user.

Considering I haven’t had one bad thing to say about this app (besides the lack of interval mode for Android), I obviously recommend it with 5 crazy awesome zombie stars!

The Point: I am in LOVE with the  Zombies, Run app!

You have to try it. Don’t take my word for it – here are some Twitter testimonials.

Have you used the Zombies, Run app? How do you like it? Let us know in the comments!

One thought on “Zombies, Run Review”